There are two approaches to making Irish Whiskey that have emerged in recent years:

Both have equal chance of failure and success and I’m not advocating one over the other here. I’ve chosen the latter and I am really glad I did, so far anyway…. I looked to the craft distilling movement in the U.S.A. when I founded my business. Most distilleries over there of which there are now thousands,  tend to start small and grow organically and that is what I have chosen to do as a whiskey bonder. When it came to our first major infrastructure expansion I decided early on not to over-complicate things and to manage the whole build myself. I did this to save money, yes but also to ensure that I am 100% au fait with every nut, bolt and widget and the function of every single thing. This won’t be our last expansion so I wanted to be 1000% hands on with this one. We may do this at a bigger scale in the future so best to have some experience this time round.

I called a few contractors to get quotes for the build, they were all so outrageous I could not justify them, so instead I just went directly to every single supplier myself and project managed the whole thing. The steel structure, the roller doors, concrete, electrics, plumbing the food-safe flooring the whole lot. I built the thing for 40% of the lowest cost I was originally quoted. The cash I saved I ploughed into our distribution efforts.

The bonders blending room is a pretty simple affair, I designed it based on my (not great) experience of blending Batch One The Gael. I learned a lot from that. I also sense checked it with some industry bods, because I’m not full of hubris…though some retirees think I am…more of that later. The main kit in the blending room is comprised of a Vatting Tank, Blending Tank and a Proofing/Marrying tank. Think three tanks in a row, so I was after 3 stainless steel tanks of varying sizes one of which had a mixing blade.

I called a few manufacturers in Ireland for pricing and the like and was asked by all of them for a detailed engineers schematic of three tanks in a row. I said to them, “just imagine three tanks in a row, that’s it.” But it didn’t compute, so I drew three circles on to our floorplan scanned it and sent that over, that did the trick and I was able to get quotes. In the end I bought my tanks from a manufacturer overseas I met at a distillery conference. I called around a few mates who had also bought from them to ensure they were Kosher and 7 months later the tanks arrived on site. All shiny and lovely.  Then I lined them up in a row….with the help of my local agricultural contractor, my Dad  and a few neighbours.

Soon,  everything we make will be end to end done on site from Maturation, Disgorgement, Blending, Proofing, Bottling and DRINKING! I will have 100% control over every aspect of what we do without having to worry about booking a timeslot for bottling, or scrambling for a place to blend. I’ll be self-sufficient, my husband will attest to the fact that this is how I like to be…

My business model is not a whizz-bang/tourist offering/ shiny copper pot still/ type, which is a great business model for many. Rather mine is the small but mighty type. I plough money into sourcing whiskey and investing in its distribution, not in Infrastructure at this early stage. One of the great joys in my life currently is the fact that I learn all the time. I was the consummate corporate drone before I took the leap to do this and after 20 odd years the corporate world, you can plateau in what you can learn in that context. I’m kind of a geek at heart so for me choosing to learn about grades of  stainless steel is really fun…

I occasionally get a bit of stick from people who go out of the way to tell me they have loads of experience in the industry. I’ve been called a “New Girl” in the comments by one of those delightful auld fellas who also let me know he is about to retire….. Their thinking is that there is only one Way to make whiskey and one way to go about technically doing so. That might have been true here in Ireland for a long time, but its not anymore. There are quite a few others in the Indie scene who have approached their build in a smart rather than a spendy way out of a simple desire to do so and to be hands on.

I’m glad I took this approach, I now know every Tri-Clamp, fitting, grate and hose in the place. My business is growing exponentially we are exporting all over the planet now, and soon all my efforts will need to go into managing that expansion. I won’t always be on-site bottling and attaching hoses and all the rest, but I will be for a time to come and I’ll be loving every minute of it. 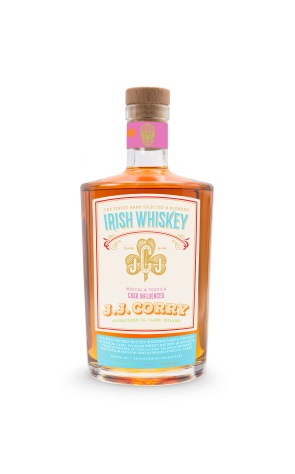 I chose Mexican Fiesta Colours for the Label

Right well, there we are then. I’ve just managed to be the first Irish Whiskey Co. to launch an Irish Whiskey incorporating Mezcal and Tequila casks…..I do not think I will be the last…..

There are a few reasons for this, first of all, a Mexican family own one of our better known distilleries… and second of all the flavour profile of both these spirits is very hard to resist. Let me be very clear here, this is not a gimmicky ‘look at me’ release. This is something I thought about for a long time based on a desire to marry two flavour profiles that I absolutely love. As a bonder, I don’t distil and I never will, so I have to influence my sourced whiskies flavour in different ways. This is just what JJ Corry did in the 1890’s he had access to casks from all over the British Empire and bought rum, sherry, port, and Bordeaux casks and used those because that’s what he had access to back then. As a modern whiskey bonder with a global outlook, I have the privilege to be able to look farther afield. We live in a globalised world after all.

I have long been a fan of tequila, back in the day, I used to work on Don Julio and had the great pleasure of visiting the agave fields and distillery in Jalisco, Mexico. In the USA and indeed in Mexico; tequila is a more refined drink than perhaps it is over here in Europe. We have been catching on that the past few years, but if you think Limes & Salt and knocking it back when you hear the word tequila, you are doing it wrong.

The Agave plant is the base for both tequila and mezcal, although mezcal is made with a different varietal to tequila. Agave has a lovely vegetal herbal quality about it, and in good tequila this can really shine, put a little maturation on it and you get an incredibly refined spirit. Mezcal has seen explosive growth in recent years and I came to it only recently. I travel to the USA a lot and have had the chance to taste hapes of the stuff and learned about it initially from bartenders. When I started to really explore it, I realised that the production of mezcal is still mostly done by families in rural areas, its almost poitin like in its ethos and I loved that.

I started poking about into the connection between Ireland and Mexico and landed on the history of the Battalion Saint Patricos. This was a group of Irish men who defected from the American Army to fight on the side of the Mexicans in the Mexican/American War in the 1860’s. They were largely comprised of men from the West Coast of Ireland and indeed led by a Galway Man. I bought a few books and read all about this really interesting piece of history and I thought what better name than The Battalion for this whiskey as an homage to those brave men.

So, I decided last year to do a little experiment, while I was visiting a cooperage in Maine that I work with, I came across some tequila and mezcal casks.  I didn’t in this case go to Mexico for casks as I only wanted 4 casks to have a play with. I figured if it went well, I’d head down to Mexico, (it has and I’m planning a trip for the 2nd batch to source casks directly.) I put some 9 year old grain into the tequila and mezcal casks and pulled a 13 year old malt and put it into the mezcal. In the end they were in there for 8 months in total.

When you are extracting cask influence you never really know what is going to happen, especially if it has not been done before. Initially I was hoping to pull loud Mesquite smoke flavours from the mezcal cask, but it didn’t work out that way. Instead we saw delicious herbal notes coming through, so we decided to focus on that and blend the grain into a ratio of tequila/mexcal that we liked and then went ahead and added the malt.  The result then is what I’m calling a Cask Influenced whiskey, because its not a straight ‘Finish.’  As bonders that is an important differentiation, I want to ensure we are influencing the end whiskey at every possible touch point, and with this I feel we really have. I chose super bright Mexican fiesta colours for the label cause its really fun and we put a day of the dead style skull on the neck label, because it sort of reminds me of the Irish pagan symbol for Sile Na Gig.

In the end we went for a 60% grain 40% malt Blend at 41% ABV. Its only 700 bottles and its now on full allocation, it’ll be released in the UK, Germany and Ireland with maybe a tiny bit of the first batch going to the USA and a bigger second batch to follow. I’m super excited about this one, the first of our experimental cask influences, the first of many I hope.

Now its off to Mexico to source more casks for batch 2!