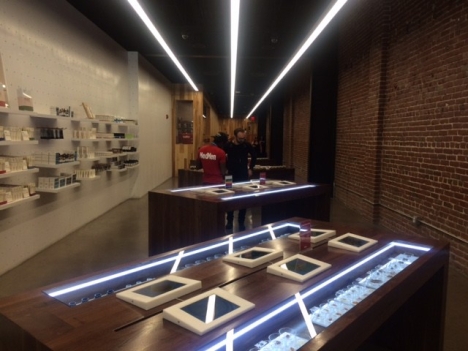 This is how you buy Weed in LA!, Pretty Nice

I’m in the U.S.A. on a business trip for a few weeks. We just launched J.J. Corry in New York with our partner distributor. I’m on the road with Blaise our sales & marketing manager which is great as we usually only see each other over Skype. After our NY launch we hopped on a plane and headed West to Los Angeles. Not a city I have spent much time in before. We rented an Airbnb in Downtown L.A. not a million miles from Skid Row. The Downtown area is clearly in the throes of gentrification and has that in-between feel to it. Homeless people shelter at night in the doorways of newly opened luxury stores and former theatre spaces are being converted to high end Loft residences.

As Blaise and I fiddled with the door code on our AirBNB we noticed what appeared to be an Apple store next door. It looked from the outside like a really slick retail experience with young people bent over ipads scrolling through products. On close inspection it turned out to be a branch of MedMen, a bunch of I imagine very wealthy marijuana entrepreneurs who have elevated buying Weed to a luxury retail experience. California of course has legalised marijuana for “medical” use. You can pop in to any of the MedMen stores and with the very professional help of some lovely staff purchase THC in liquid form, vape form, chocolate form, luxury truffle form, you name it, they even have a pet section with doggy doses for various canine gut ailments etc. Quite extraordinary and soon to be replicated in many states across the U.S.A. 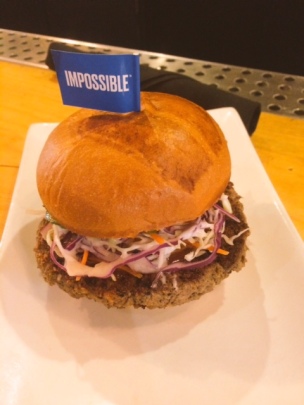 The Future of Meat Eating

We went for something to eat and passed by an Impossible Burger restaurant. Those of us in Europe have not really been exposed to this concept yet. I understand Leonardo Di Caprio is an investor in the company. The start-up is being touted as a major solution to some key problems facing humankind.  The Impossible burger is derived from plant protein, but it looks, feels and tastes like beef. We both tried it and I can tell you it was at least for me a bit of an emotional experience. There are already too many meat eaters on the planet and not enough cattle to feed them. The cattle that do exist increasingly have brutish and short lives played out on vast indoor feed lots. As the human population grows animal welfare declines. The Impossible burger is   to this issue. It tastes fantastic and I would choose it over a regular burger any time. As a planet we need to eat less meat and the Impossible Burger is the first food I have ever experienced that could viably replace it. It is certainly preferable than Lab grown beef which I find kind of icky.

After a series of meetings with some pretty spectacular women in the Whiskey Industry in LA we hopped a quick flight to Las Vegas for the Wine & Spirits Wholesale Association Conference  (WSWA) at Caesars Palace. WSWA is not a trade show for the faint of heart. It is an expensive proposition even with Bord Bia support and It takes serious preparation and pre-work to ensure it is a worthwhile endeavour. We had some great exposure last year thanks to our Brand Battle success and this year we were fortunate enough to follow that up. We did quite a few interviews and had a lot of interest in our brand and for us it was a great show. Our U.S. strategy is really coming to life now and its very exciting, 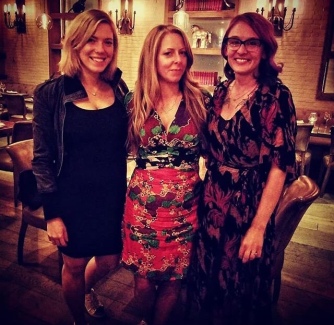 It might sound like wonderful fun to go to Las Vegas for a conference, I can assure you it is interesting yes but it is the antithesis of a holiday. These kind of things are exhausting, its back to back meetings and networking in the very professional and formal environment that is the American drinks industry. Daylight becomes a distant memory inside a windowless conference centre and you are on your feet all day talking shop, the goal is not to have a good time but to be as productive as possible and take advantage of the fact that many heavy hitters in the distribution game are in one place for a brief period. For a brand like ours just kicking on it is well worthwhile. The non-JJ Corry business highlight for me was the keynote speech by none other than Madeline Albright. A great hero of mine and one who famously delivered my favourite quote of all time “ There is a special place in hell for women who don’t help other women. “  Never a truer word spoken.

Madeline emigrated to the USA from war torn Europe at the age of 11. She did so at a time when the USA was a more welcoming place for immigrants than it is at this moment, perhaps and she rose in stature to one of the highest offices in American politics that of Secretary of State. She was the first woman to hold the position, and paved the way for both Condaleeza Rice and Hilary Clinton to do so after her.

There was a time I could not stay away from Las Vegas, but I’m not the biggest fan anymore, I’m not a gambler and as the conference days are long  and you need to be ON all the time, I made a pact to myself to be in bed by 10.30PM every night and stuck to it like glue for the most part.  We did hit https://oakandivy.com/ one of Vegas’ best cocktail bars which was excellent. Whilst there we met the guys from WhistlePig and had a good chat, they were pretty prominently featured at the show. These guys have had a pretty metoric rise and  Other than that I left the market research to Blaise on this trip.

Interestingly at the Bord Bia stand this year there were more new Irish Gin companies than whiskey by my count.  Gin is popular in the U.S.A. but not dominant in the market as a category as it is in Europe. However, it is still Irish Whiskey that distributors get very excited about. It was great nice to hang with the Irish spirit producer gang and to share war stories We had a good show, it was our second time there and we had some good visibility in a large part due to our success the year before at Brand Battle.

Here is an interview I did during the show, Next up is our NY media Launch.